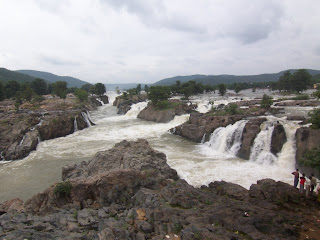 In the last few years, I have been making short visits to Bangalore, visiting friends. Now it is my first long stay in Bangalore - for a month long internship.

The work involves extensive travelling, and I seem to be learning the geography of the city the hard way - by driving around.

Hopefully this one month will allow me to catch up with a lot of friends.

Posted by Sabarinath C at 9:52 AM No comments:

With strict rules at the institute regarding leave, I kept on ignoring small fevers - till it got real bad, and seeing 104 degrees. And when one blood test showed positive for a variety of dengue I decided that it is time to go home for a break.

Back home, it was diagnosed as malaria. Malaria or dengue, all I was worried about was getting the fever down. Thankfully, medicines for malaria seems to have some effect, and I have now seen the right side of 100 degrees, after so many days.

Thanks to this fever (all its inconveniences notwithstanding), I got a much needed break from hectic activities. Being at home and getting home food is definitely doing good to me.The disappointing part of my visit home has been my grandmother's health. She had a fall two months back, breaking her thigh bone near her hips, and she had undergone a surgery. She was recovering the last time I met her, but now her condition has worsened. Other than recognising me, she hardly spoke, and replied in monosyllables. Thats very much unlike of her. I am finding this drastic change of character almost unacceptable. It's like it is not grandma but someone else. I do hope that she gets to her normal self again, and is able to walk again.
Posted by Sabarinath C at 12:30 PM No comments:

So Far So Good

It is now close to three months since my one year MBA began. These three months have been quite interesting, with me slowly finding the groove. Initially it was tough to get back to studies mode after three years of work.

Looking back, I miss the following about my office: -
- My Team, and my friends
- The monthly paycheck: There is no longer the feel good factor whenever the date nears 30th!
- Coffee and snacks breaks
- Leave (such a thing is not in the dictionary of a fast track MBA program)
- Playing TT in the evenings

But these are more than compensated by the following at my b-school: -
- Making new friends, meeting new people
- the very fact of being back at school. At 24, this is the closest I can get to school life
- reliving school college style: studying only on the eve (sometimes only mornings) of exams, watching movies on the day before exam, etc

It has been great going so far, and the grades are also looking fine so far. I am hoping to carry forward both the fun part and the grades part throughout the year :-)
Posted by Sabarinath C at 5:53 PM 1 comment:

One thing I knew even before joining a b-school was that making decisions forms the key to almost everything. Especially when it comes to making decisions which can have life long impacts. As someone who always let things “fall in place” than decide, it does not feel good when confronted with more and more decision making – deciding on major specialization, minor specialization, topic for empirical study, topic for Autumn internship, what not.

The underlying question, the answer to which could simplify a lot of decision-making, is what I want to do in life for a profession. Something which I would love doing, and give me a comfortable (not luxurious) pay. An industry where I don’t feel like a misfit, in spite of being above average. Something that would also give me enough time to spend with my family, similar to what my parents could give me.

Introspection only adds to the confusion. When I was in fifth standard, gazing at the night sky through the simple telescope I made with my father’s help, I dreamt of being an astronaut, dreaming of walking in space. In 6th standard, after reading about the Wright brothers and their aeroplane, I dreamt of making my own single seater and flying it.

An overdose of newspapers fascinated me, and bringing out a handwritten gossip tabloid in my class, I felt like a natural journalist in seventh standard. Eighth standard saw me conform to the standard Malayali ambition of becoming a doctor. In ninth standard, after having assembled a stereo cassette player I was sure that I wanted to be an electronics engineer.


In tenth standard, reading the adventure tales of James Bigglesworth by Capt W E Johns, I wanted to join the Indian Air Force as a pilot – a dream cut short by flat feet and myopia. For 11th standard, I didn’t even consider the non-science streams (the general perception in Kerala is that only those who don’t get science stream go to arts and commerce). When it came to choosing between Biology and Computer Science, arbitrarily I chose computer science because I didn’t want to learn biology (that despite being born to two avid botanists). The same repeated two years later, when I chose Computer Engineering.


Through my years in engineering, I could compile a list of jobs I would not want to do, Software Engineer topping the list. Upon finishing engineering, a computer engineer couldn’t be anything but a software engineer, hence I spent three years in the IT industry, often feeling like a misfit, in spite of being an above average programmer.

I needed a change, and here I am, in a b-school, trying to figure out where to go from here. One comforting feeling is that I am not the only confused soul around here. I do feel good that at least I know and accept that I am confused, whereas there are many who don’t. It remains to be seen whether things continue to fall in place, or whether a b-school will make me more proactive.
Posted by Sabarinath C at 4:44 PM No comments:

This post has been in the offing for quite some time, but due to many reasons never got typed in.

After nearly 3 years in the IT industry, I am going back to school. School, and not college because I am joining a one year fast track MBA program, which packs so much into a single year that there are no breaks, holidays, or weekends.

No more monthly visits to God's own country or home sweet home. No more the luxury of eating food cooked by Amma once a month. No more 'decent' pay of the IT industry - back to student life, 'thozhil rahitha vidyarthi'(unemployed student) as we say in Malayalam. To use an exaggeration, joining a jail for rigourous imprisonment where there is no parole!

On the brighter side, this course would open up a lot more avenues and wider options in my professional life. What remains to be seen is whether this one year turns out to be fruitful in finding myself - something that never happened for in the IT industry.
Posted by Sabarinath C at 10:04 PM No comments:


I am right now in Trichy, with three more hours to kill before my train to Chennai. Dusty, hot and humid like most places in Tamil Nadu.

The train was supposed to reach at 5 am, and it was not a terminating train - so kept on waking every hour, to discover at 5 am that the train was late by at least an hour and a half. First sight of trichy was the Kaveri river(it is not a river any more - you can see most of the dry river bed, and the little spring like water remaining is only ankle deep - reminded me about Nila/Bharatapuzha in Kerala). Next came the shanties and slums, and the familiar sight of women queueing for their share of water at the hand pump.

I could find easy and affordable accomodation near the central bus stand, and food at Vasanta Bhavan was also tasty (and again cheap compared to Chennai).

Visited the Rock Fort Temple yesterday. Amazing experience - the 7th century temple, its architecture, the paintings, the carvings, and last but not least, the view of Trichy from the top. Initially I also had plans to visit the Srirangam temple, but somehow felt extremely lazy (nothing new).

My planned one hour at the internet cafe is almost over now. I shall upload the pictures taken from Rock Fort soon.

Posted by Sabarinath C at 6:54 PM No comments:

Some snaps of the Shore temple at Mamallapuram, around 50 km from Chennai on the East Coast Road 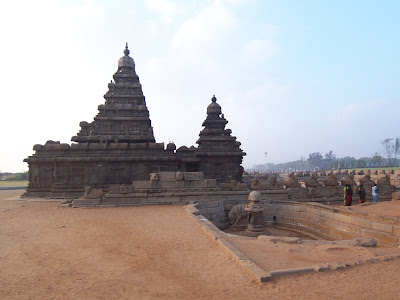 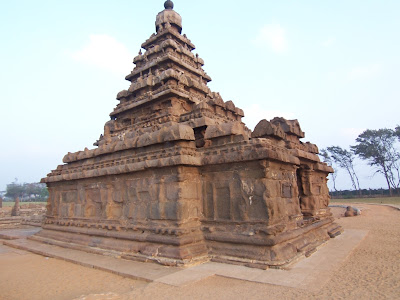 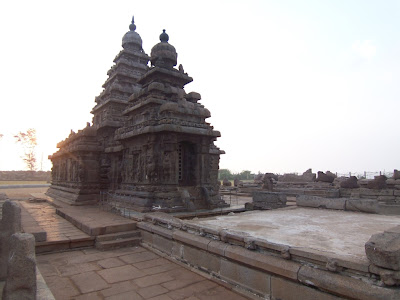 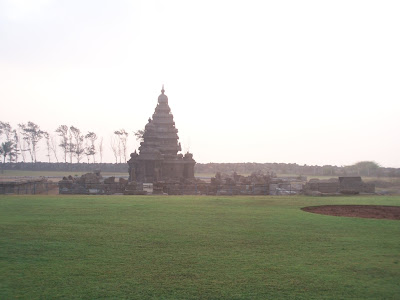 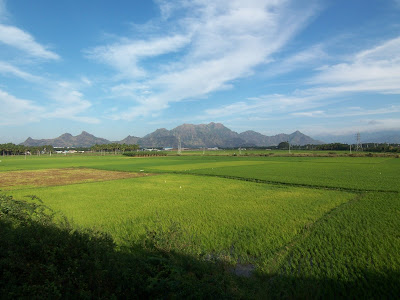 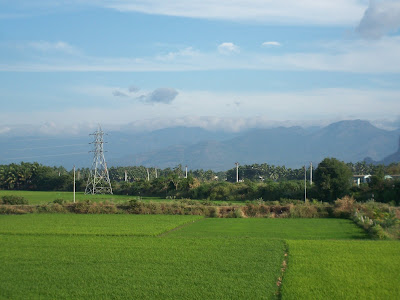 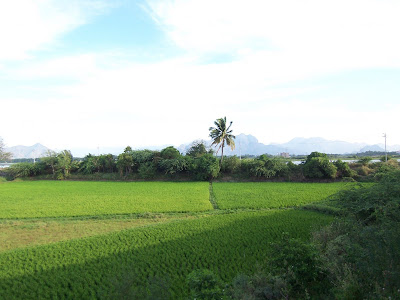 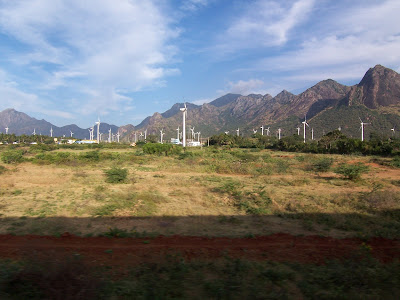 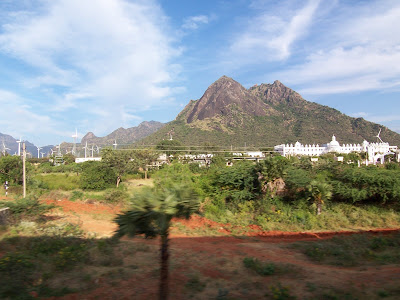 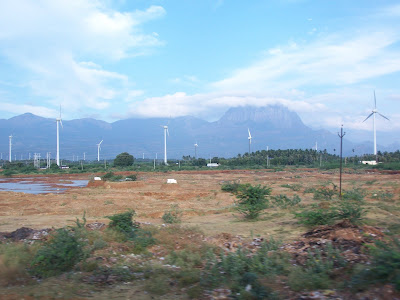 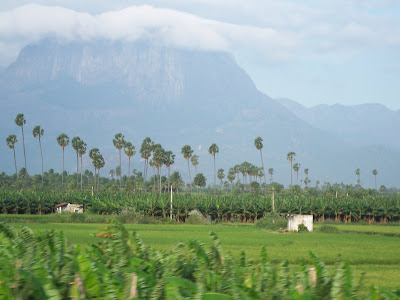 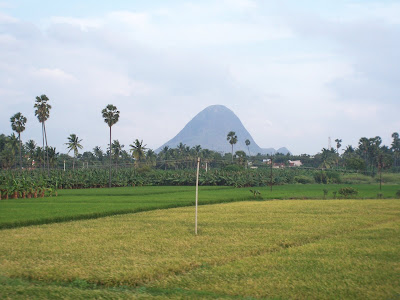 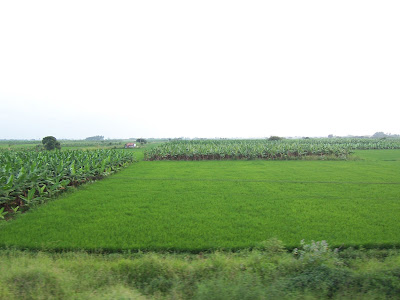 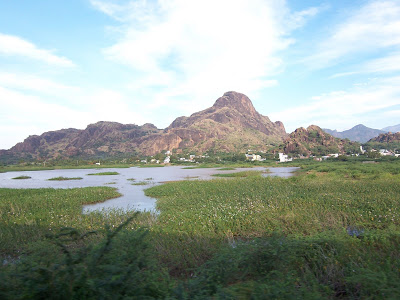 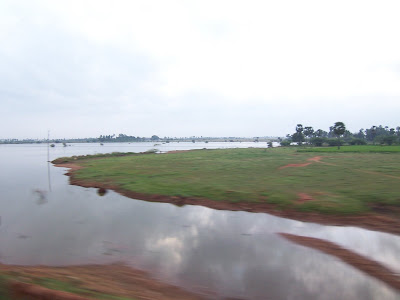 No, this post is not a film review of Mani Ratnam's latest offering. It is about an evening well spent, with one of the few people whom I consider as my Guru, one of the few teachers who has inspired me.

I met him yesterday in connection with getting a recommendation letter for admission to one of the universities. Once we were done with it, we had small chit chat, general enquiries about my batchmates, work, life, everything. I'd always loved listening to him, mostly because he has a different outlook towards everything - one of the few people who still resists using a cellphone - and, that, on many counts, I found his views to be strikingly similar to mine.

He said he played badminton with some of his students in the evening, invited me over to a game in the makeshift badminton court he had made in front of his department building. I happily joined him, teamed up with him for a couple of doubles matches against his other students, and promptly lost!

After the game, we both went back to his office to cool down for a while, before taking a walk to next bus stop outside the university. We had tea and snacks from a small shop there, continuing with our general discussions, and about my higher studies plans. When we were done with our snacks, we together took a bus to the city.

It was an evening very differently spent than my routine days in the infotech industry, but I enjoyed every moment of it. There he was, a senior professor and director of a research centre, with me, doing all those simple things, like playing a game or chit chat over tea and parippu vada in a small kerala tea shop. But then, to me, it is these simple things in life that give me joy, spending quality time with people I admire.
Posted by Sabarinath C at 9:53 PM No comments: