Last evening I watched Evam's play Urban Turban at Chennai Museum theatre at Egmore with Suraj. Going by the rush at their last play I attended, Five Point Someone (based on Chetan Bhagat's book) I hadn't really thought I would be able to get tickets on the spot - we were lucky this time, and there were lots of empty seats in the small theatre.
The audience profile was also a lot different from their other plays I have attended - this time we felt like odd people out in an all page 3 celebrity type audience.
I had gone there expecting yet another humourous play, but realized that this is a live stand-up-comedy type event. There were performances by three artists (if I could call them that!) T M Karthik, Shannon, and Karthik Kumar (co-founder). T M Karthik was excellent, with great accent and action mimicking skills, taking pot shots at his Iyengar community and polambifying about his desperately available eligible bachelor status. His performance set high standards and raised our expectations, much to the disadvantage of the later performers. Shannon is an expatriate from Canada who teaches at KFI school, and she shared some interesting anecdotes about the differences between the west and India. I am not sure if the high expectations set by T M Karthik was to blame, because I didn't enjoy this talk much, and I felt that she was simply stating the obvious many times and playing to stereotypes. For example, she mentioned about how extremely conscious about skin colour we Indians are (obvious), and how it is not so in the west (stereotype - the west is not without its own skin prejudices or racism, she probably hasn't analysed her own country as much as she has analyzed India). The last talk was by co-founder Karthik Kumar, who tried a mix of non veg humour with gyaan sessions. While the other Karthik's humour felt natural and free flowing, this Karthik's humour sounded forced and he had to resort to non-veg jokes to get the audience interested.
The play was conducted for benefit of the Blue Cross society. It was also ironical that after having criticized PFA/Blue cross for distributing pamphlets to save animals (and futility of pamphlets in having any impact or usefulness), karthik Kumar himself recommended Blue Cross's pamphlets (available at the stalls at the venue).
In related news, Evam's Five Point Someone is slotted for a nationwide tour in the next 2-3 months. My take on the marketing side of this tout is available on my professional blog.
Posted by Sabarinath C at 10:39 AM No comments: 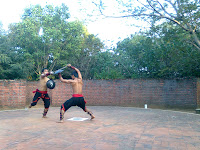 This New Year I did something different - went with wife and a close friend to Dakshin Chitra, an art gallery on the East Coast Road, a few kilometres south of Chennai. I am not the usual 'arty' type, and had made the visit of the recommendation of the accompanying friend. Unfortunately we had gone to Mahabs first and dropped in at DC on our way back, reaching at around 4 pm. 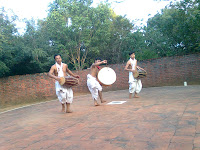 There was a North Eastern dance festival going on, and the day featured a dance troupe from Manipur. A spring time dance by the young men with drums in their hands was a very amazing experience, even for me who doesn't have much sense for dance. 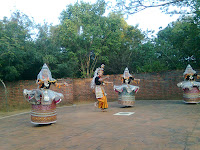 There is a lot to see at DC - they have showcased each of the four southern states' cultural heritage through real size exhibits - houses constructed in traditional style, including the interiors, for each region - for example, Chettinad, Trivandrum, Calicut, Ambur, etc.

We just had time to have a quick glance at TN and Kerala section before closing time. I have decided to make another visit, this time a full day trip, to this place, and I would recommend this to all my friends residing in or visiting Chennai.